Swamp deer have found a welcome home in the Jhilmil Jheel Area, which is a community conservation reserve. 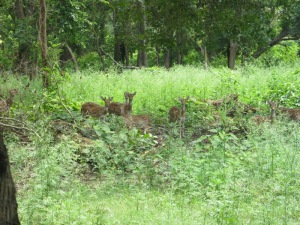 At a time when wildlife is facing threats from various quarters, there is good news from Jhilmil Jheel in Rasiabad forest range of Haridwar Forest Division for wildlife enthusiasts. The Jheel is emerging as a haven for swamp deer, a highly endangered species of wildlife protectd under schedule 1, like the tiger and elephant etc. of the Wildlife Protection Act 1972; it is also included in the red data list of rare animals in the International Union for Conservation of Nature (IUCN) an affiliate of the UNO.

The adult male swamp deer has huge antlers branching to more than 12 points. So it is popularly called Barasingha in India. Swamp deer mostly move in herds of 20-30, but in the mating season the size of the herds gets larger. The swamp deer shed their antlers in April, The male deer are poached for their antlers, the sale of which has now been banned.

Dr. B.D. Joshi, professor of environmental sciences in Gurukul Kangri University, Haridwar and a noted wildlife expert, says that in north India, at this time, Dudhwa Tiger Reserve along with Kishanpur Sanctuary in UP, with around 1200+ population of this species, are the stronghold of the swamp deer, while a small number of this species is also found in the swamps near Hastinapur in Meerut district. In Uttarakhand, Jhilmil Jheel in Haridwar Forest Division has emerged as an ideal habitat for this rare species of animals.

It may be mentioned that in 2005, the state forest authorities, co-ordinating with the Wildlife Institute of India (WII) Dehradun, conducted a survey of the Jheel to assess the population of swam deer in the Jheel, which is a saucer shaped wetland, spreading over 3783.5 hectare of land along the bank of the Ganga. The area is rich in floral and fauna biodiversity, but at that time, there was no authentic data about the presence of swamp deer in the Jheel. The team, to their delight, sighted a herd of 32 swamp deer.

On the report of expert team, the state Government recommended to the Union Ministry of Forest and Environment to declare the wetland a protected area for the better conservation of swamp deer. In 2005, the then President of the country, Dr. APJ Abdul Kalam, dedicated this

Community Conservation Reserve to the country by releasing a poster.

Jhilmil Jheel in Haridwar and Asan Barrage in Dehradun in Dehradun are the only two community conservation reserves in Uttarakhand, the first for the conservation of swamp deer and the second for migratory fowls

The Jhilmil Jheel (Lake) Conservation Reserve is located at the Junction of the Bhabhar and Terai formations extending up to the Ganges in Uttarakhand State. The area is not only rich in biodiversity but also has landscape, cultural and social heritage diversity richness.

Jhilmil Jheel is situated सस N 290 32’ to 290 50’ and E 780 to 780 15’ covering an area of 3800 Ha of Reserved Forest. The altitude of the area varies from 200 to 250 meters above MSL. It is located between the Haridwar-Najibabd Highway and the natural course of the Ganges to the south of it in Chiryapur Range of Haridwar Forest Division, Uttarakhand. It is connected to River Ganga and is surrounded by Reserved Forest at Chiryapur Range. On 1st Feb. 2005, 34 swap deer were sighted in Jhilmil Jheel and on 14th August, 2005, this area was declared as Conservation Reserve by Honourable President (former) of India, Prof. A.P.J. Abdul Kalam.

Book your trip, mail me at : krishna@pathikworld.com